Do you need a garage outlet for your new electric car? Let us know. We can help!

It's been a while since our last post. Weather is getting cold. We can help you save on your electrical bill by installing energy efficient lights all over your place. Week by week, month by month this can make a difference and save you a buck! Free estimates!

44 Ways to Lower Your Electric Bill

Cold months are coming so wanted to share this articles with few tips on how to save on electric bills. Some are okay some are over the top, but if anything can benefit you...why not!!

Say good-bye to high electric bills.These tips will help you increase your home efficiency, from using insulating paint to getting an energy audit.

we are excited for our new website! Check it out at www.energolectric.com

It wasn’t that long when the only lighting choice for a household was the typical incandescent bulb. Need lights? Go to the store, pick up a regular bulb with wattage you need, depending on the choice of brightness. But that time is gone. Although not everyone, but many households are leveraging CFL and LED technology. These lights are way more energy efficient, last longer, and in the long term probably cheaper.

What’s the difference between the two most common light bulbs nowadays – CFL vs LED?

CFLs, unlike regular bulbs, do not run an electric current through a wire. There is instead a current creating argon and mercury v***r. This in turn, creates ultraviolet light that translated into visible light. CFLs consume about 70% less energy than regular light bulbs. One of the biggest drawbacks of CFLs is that it takes a while for them to turn on once you flip the switch. Also, CFLs contain mercury which is harmful to the environment and health.

According to the Lighting Research Center, LED light bulbs work by bringing together currents with a positive and negative charge to create energy released in the form of light. The result is a fast source of light that is reliable, instantaneous, and able to be dimmed. What sets LED lights apart from any other is how long they last. On average, LED light bulbs can last between 20,000 – 50,000 hours.

Which choice is more cost effective?
Check out the price comparison in the second chart in the following link:

It shows comparison between Incandescent, CFL and LED lights for a 10-year period. The LED light is a clear winner in terms of price over time with energy consumption.

We are working on our new website. Stay tuned!

Another splendid home is shining brighter than ever with new lights installed by none other than E-ner-go-Lec-tric!

Check our new ad on yp.com. It was launched a few days ago. A new group-on deal is on its way too. Stay tuned.

Share your own tips, photos and more- tell us what you think of this business! 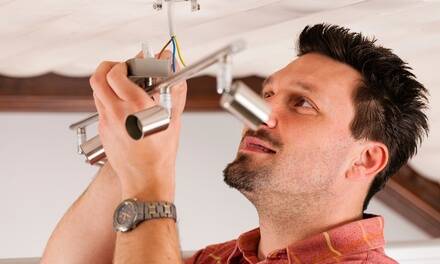 $89 for $200 Worth of Electrician Services from EnergoLectric, LC

Check out our groupon deal! Hurry up, not a whole lot left!
http://www.groupon.com/deals/energolectric-lc

Be the first to know and let us send you an email when EnergoLectric posts news and promotions. Your email address will not be used for any other purpose, and you can unsubscribe at any time.

Send a message to EnergoLectric:

Other Contractors in Sterling

Other Contractors in Sterling (show all)