Civil and General is looking for a Full time Warehouse Store Person for our busy Drainage and Plumbing products business based in Malaga.
With a minimum of 5 years experience in a hands on warehouse store person role
Current Forklift licence and physically capable of being continuously active during each shift.
Monday -Friday.
Interested applicants please send a brief CV and letter to
[email protected]

Designed and manufactured in Australia to ISO9001:2014 standards, this unique and innovative ground stabilisation technology is easy and quick to install and can be used to:
• manage water runoff,
• assist with slope stabilisation and sediment control,
• prevent drainage and hydraulic erosion,
• rehabilitate industrial and mining sites, and
• control and manage storm water drainage to prevent flooding and other drainage issues.

GEOHEX™ is a permeable ground stabilisation technology engineered for use in multiple applications. It is used to help stabilise infill material, mitigate erosion, control shearing (lateral and vertical movement) in a wide range of soil and substrate types.

With a load rating of 1,200 tonnes per square metre when filled, the GEOHEX™ Erosion Control System is a safe and cost effective substitute for concrete in many applications. Made from high impact resistant, 100% recycled co-polymer polypropylene, it is environmentally friendly and its lightweight design reduces logistic costs.

GEOHEX™ is:
• 100% recyclable
• Able to be laid in any weather
• Non-toxic to humans, animals and plants
• Easy DIY installation
• More cost effective than concrete
• Lightweight and durable
• Able to be cut to size
• Easily stored and transported as it nests together
• Non-reactive to solvents, oils, chemicals and water
• Easily maintained thereby reducing maintenance costs.

Western Australia opened its first Taco Bell store when the US chain opened in Midland on Wednesday September 29 2021 with a launch party featuring live music, games, merchandise giveaways and live graffiti. The second Taco Bell for WA will be opening soon on Canning Vale’s Nicholson Road. It will be next to the Canning Vale police station and near the future Nicholson Road train station.

Civil and General Distributors have supplied Halgan MGTS4000 litre below ground grease arrestors to both of these facilities. These units are fabricated from polyethylene and come fitted with internal surge control devices. The Halgan grease arrestors are ideal for difficult site applications where access is an issue. Installation costs can be considerably reduced as there is no need for cranes or heavy haulage equipment.

Features:
• Made of UV stabilised polyethylene;
• Easy to transport and install;
• Will NOT crack, rust or corrode;
• Lightweight;
• Free standing;
• Available in sizes ranging from 550 litres to 10,000 litres; and
• Above or below ground with a variety of lids.

Happy New Year!
We at Civil and General Distributors are back to our normal hours. Monday to Friday 8am to 4:30pm (Warehouse/deliveries close at 4pm).

The durability of MEA polymer concrete channels was one of the deciding factors in installing:

The “Z” channel system has a Galvanised edge rail for cost effectiveness, longevity and aesthetic value. It is for medium duty applications.

The “C” channel system has a Cast Iron edge rail for strength and longevity. It is for heavy duty applications.

The Stormtech 38G90 is a 38mm wide top drainage channel connected via downpipes at 200mm intervals to a 90mm drain pipe below. It is used in thousands of driveways across Australia because it is unobtrusive but highly effective.

Civil and General Distributors joined with a number of our plumber clients to supply products to the new Woolworths in Ellenbrook, Inglewood, Highgate and Balcatta. We also assisted with Woolworths redevelopments in Mundaring, Rockingham and Karrinyup.

Our stainless steel ranges of products provide superior grate solutions in many areas of these supermarkets including tundishes and square bar grates for heavy duty areas. Civil and General stainless steel floor plates are also installed across some supermarket floors. Being ideal for supermarkets, our large volume one piece Halgan grease traps are approved as a preferred supplier by Woolworths. MEA polymer concrete channel and grates were also installed as they are ideal for load out areas. Poppy Lane Coffee and Flowers, nestled on the ground floor of Perth’s Anzac House at 28 St George’s Terrace, have made the most of one of the new look drains available from Stormtech with Civil and General Distributors supplying and Majestic Plumbers installing the stainless steel perpendicular angle slot grates.

Storm water runoff is rainfall that flows over the ground surface of an open area such as car parks, roads, driveways, rooftops and other paved areas that won’t allow water to be absorbed by the ground, taking with it all sorts of pollutants, litter and debris present in the surface.

Gross Pollutant Traps (GPTs) are designed as the first line of defence against pollutants washed down by storm water runoff in order to capture them before they enter the storm water system or waterways. GPTs target litter in general, leaves, branches, bark, clippings, debris, pollutants, surface oils, hydrocarbons, suspended sediment and other pollutants.

Halgan GPTs offer maximum treatable flow of 75 litres per second that captures up to 99% of standard gross pollutants under normal conditions. They feature a high flow bypass system allowing flows above treatable to bypass the unit, which would be clean storm water, after the first rush has delivered the litter and sediment to the GPT continuous separation screen. In addition to this they are easy to transport and install as the tanks are made from lightweight high density polyethylene, allowing easy manoeuvring.

We can offer design assistance in order to specify the correct model and size required given site conditions and the expected amount of rainfall based on the site’s geographical location.

Civil and General Distributors distributes the award-winning Buzon Pedestals for the design and construction of raised flooring. This product appeals to architects, landscapers and builders because it is easy to install and provides easy access for maintenance.
The Buzon Original Screwjack Pedestal System now provides a compliant solution for access by people with a disability. This is a requirement of the Design for Access and Mobility Standard (AS-1428.1)-2009. The Buzon pedestal system is complaint when used in conjunction with a compliant paving or flooring surface. This is great news as the design of buildings for “age in place” demands all doorways and access areas are zero threshold with a smooth transition to satisfy AS1428. With the Buzon Pedestals having millimetric adjustments they easily achieve the required zero threshold (no step) outcome.
We are also pleased to advise that the Buzon Pedestals have successfully passed the Simultaneous Determination of Ignitability, Flame Propagation, Heat Release and Smoke Release fire test as required by AS1530.3 – 1999. This provides piece of mind for Architects, Designers and Builders looking to utilise the Buzon Pedestals in their projects.

We are excited to be part of a fantastic new venue opening soon in the Swan Valley being Bailey Brewing Co which is a 9.5-acre backyard and welcoming brew house. Looking to open by the end of 2020 this family friendly venue will no doubt quickly become another gem in our famous Swan Valley.
Civil and General Distributors has been working with Galvins and Accord Plumbing to provide:
• a 2,000 litre Halgan grease trap,
• a 5,000 litre Halgan cooling pit,
• Hydro MEA ductile iron grates and polymer concrete channel for the loading dock,
• SPS spot drains, and
• Ultimate custom stainless steel channel and grates for the commercial kitchen.

Lakelands Country Club is a private golf club located in a tranquil rural setting just 30 minutes north of Perth city. They are redeveloping their existing clubhouse area to provide a modern building designed to meet the needs of the members of this beautifully located Golf Club.
Civil and General Distributors is working with Westway Plumbing to provide external Hydro MEA channels with galvanised steel Heelguard grates, Ausdrain Enviromodule2, SPS spot drains, and Ultimate channel and grates in the kitchen and other internal areas.

Pool edge - No ledge.
Civil and General Distributors supplied Ultimate custom made 316 grade stainless steel 189mm wide channels together with electro-polished Heelguard grates for this beautifully designed pool in City Beach. The specially designed channel and grates slope perfectly to the edge of the pool to provide a seamless connection with the waters edge.

Balconies abound! Civil and General supplied Stormtech Tile insert grates to enhance the look of these two balconies while still providing exceptional drainage - one in Dalkeith and one in North Beach.

Spring back outside! In Hillarys with the wonderful salt air and westerly winds Civil and General supplied our Ultimate electropolished grate and trough to ensure all the rainfall and wind driven water would be captured. In Cottesloe we supplied our Ultimate tile insert grate and trough for a different look while still providing exceptional drainage.

At Civil and General we pride ourselves on making sure things are right first time every time. Here we have a custom made 316 grade stainless steel pool drain being checked before delivery to our customer.

The latest pedestal in the Buzon DPH Range, the DPH-1 is adjustable from 18mm to 28 mm. Thanks to its lugs, it easily adjusts in height allowing quick and reliable implementation. This DPH pedestal will create a perfect levelled terrace when the height reserve is not large. The DPH-1 pedestal maintains its strength and stability even under heavy and frequent use. Thanks to its reinforced structure, it is particularly recommended for use with heavier floor finishes. 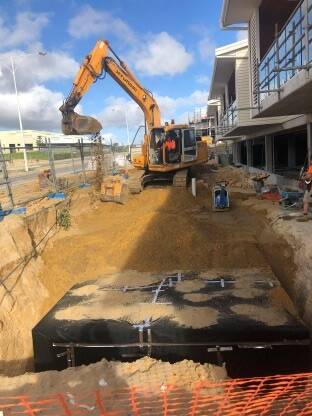 See how the Ausdrain Enviromodule 2 modules are installed at the new Aegis Shorehaven Aged Care facility. Opening late 2020 this new facility will provide 134 spacious and beautifully appointed rooms for high and low care clientele. As a WA family owned business ourselves Civil and General Distributors are proud to support Aegis Aged Care, another WA family owned business, by joining with plumbers Wilcox and Co to supply this Ausdrain module water infiltration and storage system which is designed and developed to fit with the principles and best management practices for Water Sensitive Urban Design.

Over the next few days Civil and General Distributors are receiving five shipping containers of new stock. We are very excited to be taking deliveries of additional SPS, Halgan, Ausdrain and Hydro MEA stock items. Some of these items have already been earmarked for customer orders, however there will still be plenty of items available. Contact our sales team now for advice on your next project.

Be the first to know and let us send you an email when Civil and General Distributors posts news and promotions. Your email address will not be used for any other purpose, and you can unsubscribe at any time.

Send a message to Civil and General Distributors:

Other Plumbers in Perth